I am not sure to what to say about the "2nd Annual Reflections on Holocaust & Genocides" program organized by Mike Ghouse Learning about the darkest episodes of "humanity" was not a great experience. Hearing stories about how far people would go to destroy another human being or an entire community was extremely distressful. I came to the program to see the good that humanity has to offer, but it seemed like evil and injustice always prevail -- years after years and decades after decades. We keep jumping from one atrocity to another.

The program started just before Maghrib, so few minutes into the speeches I headed out for prayers. I kept thinking about what would motivate people to commit such horrific crimes? What kind of ignorance inspires a person to kill innocent victims? So many un-Godly acts in the name of God?

Maghrib prayers helped me get some perspective on all this chaos. I re-remembered our 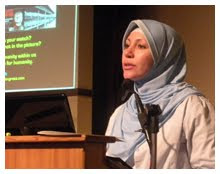 purpose on this earth and duty to mankind. The Prophet Muhammad (peace be upon him) once said that when you see injustice and evil, try and stop it with your hands, if you are unable to do so then speak out against it and if you are unable to speak out then in your heart condemn it, but that's weakest sign of faith. I began thinking about the panel of speakers and the attendees. They are trying to stop evil from spreading, aren't they? Some have even dedicated their entire lives to bring an end to these atrocities. They organize protests, work with aid groups, they are going out raising funds for various causes and not only speaking out against genocides but empowering the victims to take action as well. 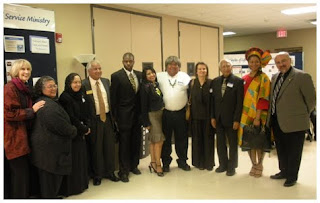 Suddenly, I was not feeling as hopeless. Actually, I felt pretty dandy, if I may say so. I thanked God for allowing me to spend some time in the company of those who care and and are stepping up to the challenge. I had the opportunity to socialize with real role models. They came together regardless of their ethnicity, faith or nationality to acknowledge crimes against humanity. They came together to do every thing in their power to help the victims stand up in the face of injustice against fellow humans. And I think that's pretty cool.
Posted by Mike Ghouse at 7:43 PM