15th Annual Reflections on the Holocaust and Genocides

The purpose of this event is education, information, and activism. We hope to learn and acknowledge our failings and make a personal commitment to our share of saying, "Never Again."

Tickets are complimentary, but donations are accepted
http://centerforpluralism.com/donate/

We hope you will walk out of the event with a genuine feeling of being a contributor towards building a cohesive world where no human has to live in apprehension or fear of the other. 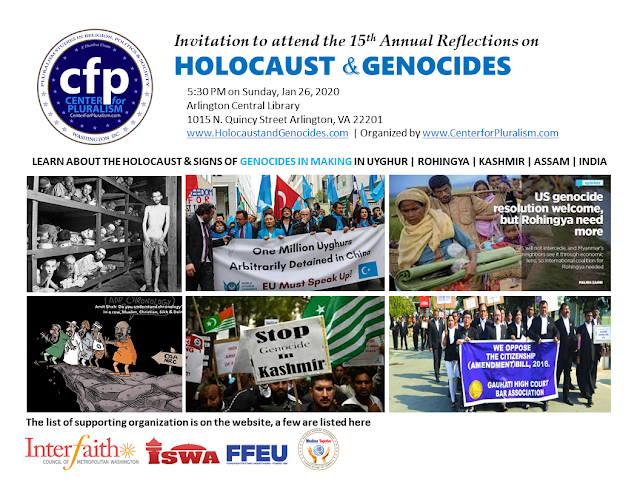 The Jewish community has been commemorating the Holocaust event since 1953, known as Yom HaShoah in Synagogues around the world. The general public learns it by visiting the Holocaust Museums and educational institutions.

At the Center for Pluralism, we are committed to spreading knowledge of the Holocaust and Genocide through interfaith and public events, including the Annual reflections.


Special Note for Indians: In the last 14 years, we have covered nearly 30 genocides and difficult events such as the Sikh Genocide, Plight of Kashmiri Pundits, Gujarat Massacre, Bangladesh Genocide among other events in the world. These are not against anyone but highlighting the human suffering inflicted by fellow humans.


Our format consists of four parts; Interfaith prayers, Holocaust, Genocides, Massacred and the Pledge of Peace. Silently, we will acknowledge all suffering, but physically we are limited to a few Genocides each year.

This year, a Holocaust survivor will share his story, followed by updated Uyghur, Rohingya, and the signs of making of Genocide in India. I urge everyone to watch the Schindler's list and Civil War movies to grasp the signs.

I believe, when we acknowledge each other's grief and participate in each other's commemoration, we connect with the humanness within ourselves and seed the relationship of understanding and caring for each other.

There is a shameless cruelty in us, either we shy away or refuse to acknowledge the sufferings of others, worrying that it will devalue our own, or amounts to infidelity to our pain, and every community and nation has suffered through this. To all those who have endured the Holocaust, Genocides, Massacres, Ethnic Cleansing, Land Mines, Hunger, Rape, Torture, Occupation, Expulsion, and inhuman brutality, we must say, you are not alone. The least we can do in the process of healing is to acknowledge every one's pain in one voice.

This is a Muslim initiative to assure fellow humans who have endured the Holocaust, Genocide, ethnic cleansing, massacres, rapes, injustice and other atrocities that we are all in this together to create a better world. Tikkun Olam is our sacred duty.


Published at 148 News Outlets
A few are listed below 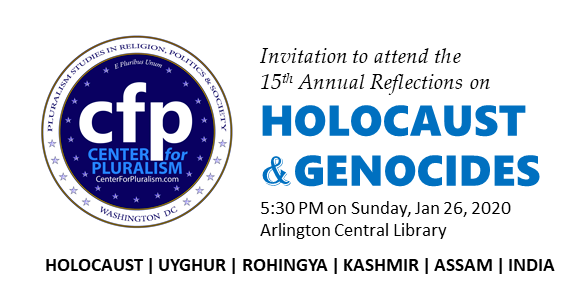 Posted by Mike Ghouse at 2:03 AM No comments:

An internationally acclaimed expert raises concerns about the possible mass extermination of Muslims while briefing US Congress on the situation in Kashmir and Assam.
Courtesay Sabrangindia14 Dec 2019 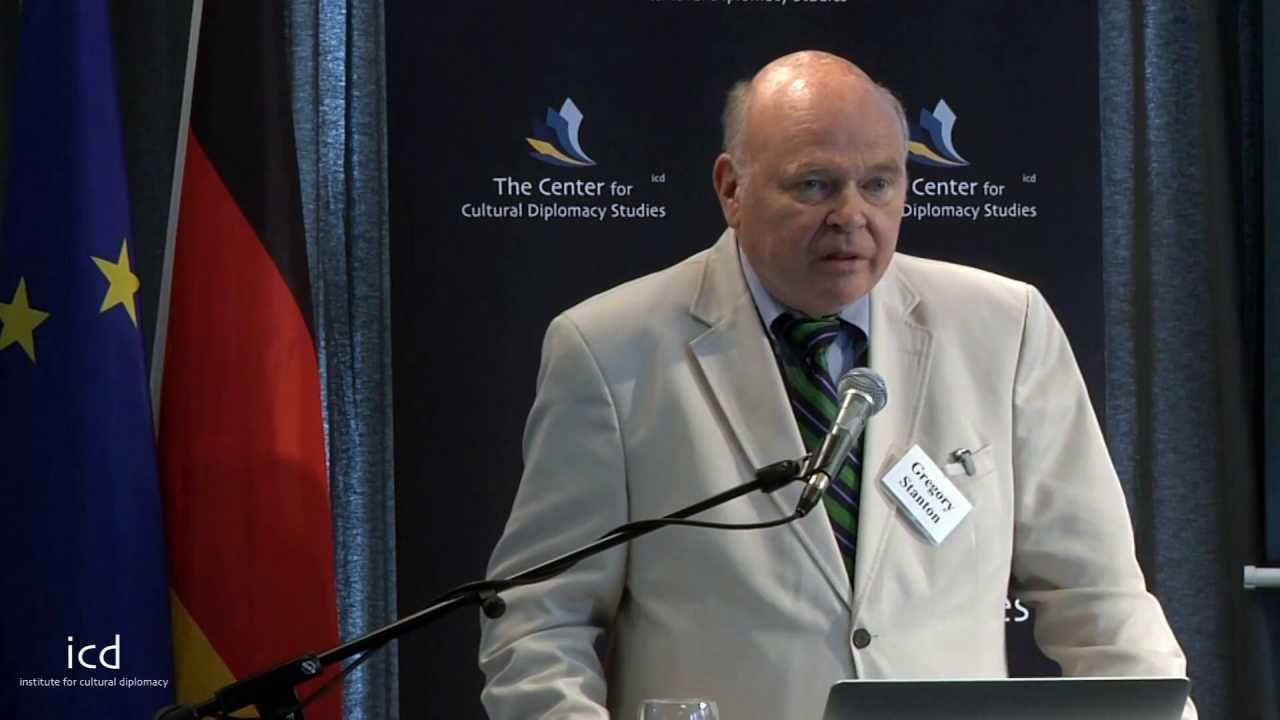 Dr. Gregory Stanton, the founder of Genocide Watch, addressed an audience of Congressional and Government officials at a briefing titled Ground Reports on Kashmir and NRC in Washington D.C on December 12 where he said, “Preparation for a genocide is definitely under way in India.” He said that persecution of Muslims in Assam and Kashmir “is the stage just before genocide,” adding, “The next stage is extermination — that’s what we call a genocide.”
Dr. Stanton created the world-famous “Ten Stages of Genocide” as a presentation to the U.S. Department of State when he worked there in 1996. According to Dr. Stanton, the ten stages of genocide are as follows:
Dr. Stanton also drafted UN Security Council resolutions that created the International Criminal Tribunal on Rwanda and the Burundi Commission of Inquiry, two places where genocides had occurred. A former President of the International Association of Genocide Scholars, his research on genocides in Cambodia and Rwanda, and of the Rohingyas, is recognized worldwide.
CJP secretary and Human Rights Defender Teesta Setalvad also addressed the audience via video conferencing and said that the National Register of Citizens (NRC) in Assam was “being used to subvert human rights in Assam. There are laid down guidelines and standard operating procedures to carry out this exercise but none of it is being followed. We have to ask if this exercise is being carried out within the ambit of the constitution.”
Setalvad also criticised the Citizenship Amendment Act saying it would “bring untold suffering to people across the country. It will damage, fundamentally and irreparably, the nature of the Indian republic. This is why they, and all citizens of conscience, demand that the government not betray the constitution.”
Also participating in the Briefing via video link, Dr. Angana Chatterji, a scholar with UC Berkeley, slammed the crackdown in Kashmir since the Indian government revoked the Constitutionally mandated special status of Jammu and Kashmir on August 5. She shared that reports have documented the “inhumane treatment and torture of children, the elderly, and women; illegal detentions, including mass detentions; the denial of the basic needs of life, the curtailment of freedom of speech and movement, the falsification of social facts and their amplification by the state, and the closure of sacred places,” she said. “Cries of pain” of a torture victim were broadcast via a mosque’s speaker system. “State forces have raided homes, destroyed property and mixed food with kerosene,” said Dr. Chatterji.
Raqib Hameed Naik, a journalist from Jammu and Kashmir said the ongoing lock-down in Kashmir was “one of the worst sieges in the last decade… Officially there are no restrictions, but unofficially the government has imposed an undeclared emergency.” Naik also disputed the Indian government’s claim that Indian troops had not killed any Kashmiris since August 5 when the state’s special status was withdrawn.
“Let me put it on record that, so far, we have been able to document five killings by security forces. The number could be higher, but due to communication blockade and severe restrictions on the movement of the press, we have not been able to get exact figures from the different parts of the valley.” Naik said he had met with “many minors” who were imprisoned “without charges”.
The Congressional briefing was organized by three U.S.-based civil society organizations, namely, the Indian American Muslim Council (IAMC), Emgage Action, and Hindus for Human Rights (HfHR).
Posted by Mike Ghouse at 9:40 AM No comments: