Muslims join Jews in commemorating Yom HaShoah. The best thing you can do to support Jews in their most solemn moment of history  is to visit the Holocaust Museum in your city and attend the Yom HaShoah commemorative prayers in your local synagogues this week. 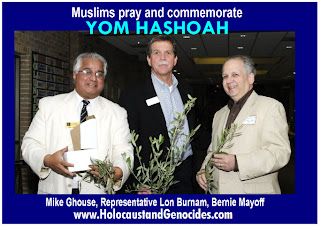 The history, Wikipedia,  “Yom HaZikaron laShoah ve-laG'vurah” known colloquially in Israel and abroad as Yom HaShoah and in English as Holocaust Remembrance Day, or Holocaust Day, is observed as Israel's day of commemoration for the approximately six million Jews who perished in the Holocaust as a result of the actions carried out by Nazi Germany and its accessories, and for the Jewish resistance in that period."


"In Israel, it is a national memorial day. It was inaugurated in 1953, anchored by a law signed by the Prime Minister of Israel David Ben-Gurion and the President of Israel Yitzhak Ben-Zvi. It is held on the 27th of Nisan (April/May), unless the 27th would be adjacent to Shabbat, in which case the date is shifted by a day In other countries there are different commemorative days—see Holocaust Memorial Day.”
Last year I was at Temple Emanu-El and was got to meet my favorite lady, the Holocaust Survivor, Rosa Lee Schiff who and her late husband William Schiff were the key note speakers at the first Holocaust commemoration after the United Nations proclamation in 2005.

If there is to be peace in the cities,
there must be peace between neighbors.

If there is to be peace between neighbors,
there must be peace in the home.

Peace on earth let it begin with me,
While listening to the notes of the Holocaust Survivors read by their family members tonight, I was in literal coma, grasping the pain and the betrayal of the world during the most difficult of times for the Jewish community. I sincerely wish the world understands this pain.


Muslims took the initiative to pray and commemorate the Holocaust event annually since the United Nations proclaimed it in November of 2005. Education was the purpose; we have to learn, acknowledge and reflect upon the terrible things we have inflicted upon each other, and we have to understand that our safety and security hinges on the safety of all others around us.

Every year we bring people of different faith together to reflect upon the Holocaust and Genocides and make a personal commitment to speak up, whenever we see a sign of massacre and genocides that is the least we can do.


There is a shameless cruelty in us, either we shy away or refuse to acknowledge the sufferings of others, worrying that it will devalue our own or somehow it amounts to infidelity to our own cause. Shame on us that we justifying massacres by believing and propagating that the victims deserved it or asked for it.

Pictures from the first year: https://picasaweb.google.com/FoundationforPluralism/HolocaustCommemorationByMuslims#5278725516349736482

Pictures for the last five years are at www.HolocaustandGenocides.com

We sincerely pray that the following understanding continues to develop in our hearts;
Other people's suffering is as legitimate as mine; It is easy to see ourselves as Victims, but we must also see the perpetrator in us; when we strip the politics out of a conflict, we see hope; We can value others suffering without lessening our own; the overriding desire to highlight our own blinds us from other's suffering. A sense of responsibility for creating a better world is awakened ultimately co-existence and every one's safety and peace should be the driving thought.

To all those, who have endured holocaust, genocides, massacres, bombs, annihilation, land mines, hunger, rape, torture, occupation and inhuman brutality, we say you are not alone. The least we can do in the process of healing is to acknowledge every one's pain in one voice.

We have begun the process of coming together as one people, to stand with you, we are indeed one world and a single humanity, and caring for each other brings safety and peace to all of us. I cannot be safe if the people around me are not, and I will not have peace if people around me don't. It is in my interest to seek a peaceful world for one and all.

We are working on initiating a course on tolerance education, so one day; we all can learn to have a heart that opens to the pain of every human, yes, we can do that.

Mike Ghouse is the founder of this event and is committed to building a cohesive America, where no Americans has to live in apprehension or fear of the other. He is a speaker, thinker and a writer and offers pluralistic solutions on current issues. His work is listed at www.MikeGhouse.net

Posted by Mike Ghouse at 8:49 PM No comments: