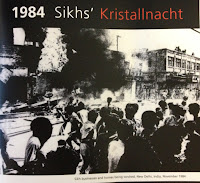 "The first response from those who support killing of other people is usually, "they asked for it", "we are fine now and there is no need to mess it up with these programs" and a few more extreme thoughts. These  ideas are born out of their inability to deal with the situation and find solutions. Nothing was really fine, if it was, this would not have happened. The idea of this and other programs is to understand the issue, beware and remove the cancerous cell that is destroying the fabric of the society.  No one needs to be blamed, but together, we need to remove the root cause. All of us deserve Mukti, an ironic element that one will not have, if the other does not.

Education is the purpose; we have to learn, acknowledge and reflect upon the terrible things we (humans) have inflicted upon each other, and we have to understand that our safety hinges on the safety of all others around us. In a given society there is a spiritual balance that allows each one to pursue his or her own happiness, when some one affects that balance, it hurts us all. There is a perpetrator in us that silently endorses the crimes by not speaking up and ultimately suffers from within, the law of karma is operative within every soul. No one goes scot free." Mike Ghouse, Chair, Annual Holocaust and Genocides event, Dallas.

A seven minutes video clip about the Sikh Massacre
http://www.sikhgenocide.org/nov1984.htm

Plaques for the guest speakers

Langar - Vegetarian Lunch served, a Sikh tradition around the world.

More pictures will be added.


The  Sikh community reaffirmed the right values when tragedy befell on their community in the Wisconsin shooting. Indeed, their response to the Wisconsin Gurudwara massacre was exemplary and reflects the teachings of the Guru Nanak, the founder of Sikhism and every one of the spiritual masters from Zarathustra, Confucius, Moses, Krishna, Mahavira, Jesus, Muhammad, Buddha, Baha'u'llah, and other great spiritual masters. Your leadership in building a cohesive America is greatly appreciated by all.
We have a special program on Sunday, January 27 to reflect on the Sikh Massacre
http://HolocaustandGenocides.blogspot.com

Last week, I  posted an upcoming event "Remembrance and Reflection: 1984 Sikh Genocide (posted below)" at Dallas Indians, a 1800 member group in the Dallas area for all Indians. I am glad a few friends called in and sought clarifications. It is always good to inquire and find out before building up emotions against it. The event is on Saturday, November 3rd at Noon.

Then I read a beautiful personal story by Kirpal Singh from Melbourne, who shared the story of stereotyping Muslims in Nigeria and alluded to bringing a closure to the Sikh Massacre in India.

The humorous part of the story was, one of the callers was cursing Muslims that they do not understand free speech, and yet, he asked me not post events like this, he believed it was divisive.  Indeed on the surface it does sound like it, but when you read the entire note, you will find otherwise.

You might get away refusing to oblige your spouse or a child's request... or even compel them to obey you...but it builds resentment if not dealt with squarely, it puts a damper on the enthusiasm of the relationship and no one lives in peace. If there is a murder, child abuse or sexual abuse in the community, we cannot sit quite, we have to find a resolution so the victims can leave in peace, and justice is meted out to the abuser.

Taking the example to India - The Kashmiri Pandits, Dalits, Muslims, Christians and Sikhs have been treated unfairly and unjustly on occasions, especially when it comes to killing a large number of people. The wounds remain unhealed for the communities and every one lives with un-ease, discomfort and apprehension. Silence or Money compensation is not the way to repair the damage, but an acknowledgement is the way to go. An apology will heal the wounds for the entire society. We need to seek Mukti from the gnawing conscience, and no ones Karma will go unbalanced.

When Queen Elizabeth visited India a few years back, she apologized for the Jalianwala Bagh Massacre, that was the right thing to do and we welcomed it. There have been many more good examples of healing like that.

About six years ago a film was made by Memnosyne Foundation, "One source many paths" where I represented the Muslim community and 47 other people represented other faith traditions. Uma Mysoreaker, president of the Hindu Temple in New York represented the Hindu Community. The Hindus and the Native Americans shared their pain about the forced conversions by Muslims and Christians alike, while Muslims also have been a target of prejudice after 9/11. I apologized for the wrong doings done by Muslims kings like Aurangzeb and Ghaznavi and individuals like Bin Laden.

The healing was done when a Native American offered a Bandana to be received as a closure, a Christian minister gracefully accepted it, .. every one remained silent and absorbed the moments, some of us cried, including me, it was indeed a relief. It is also an acknowledgement that we the people (living now) have nothing to do with what was done, and yet, we owed an apology as the wrong doing was committed in the name of the religion or the land we shared.

The Chapters on Pandits, Dalits, Muslims, Christians and Sikhs can be brought to closure by acknowledgment of the wrong doing, its not going to go away by hiding from it. Humility builds bridges, that is what every religion teaches; to be humble. It is wrong, and dead wrong to believe that we are all against each other, we are not, some of us are, but we need to work cohesively to make India a greater nation by being on a higher moral ground of shedding the arrogance or pretending that, we do not have a problem.

The Sikh Massacre is obviously not brought to the closure,  mass graves have been discovered and the identified remains have been given back to their families, but there are hundreds of kids, women and men missing from that period. An accounting needs to be done to bring a relief to families as to what happened to their loved ones. We are all in this together without blaming the past and to find solutions.

The bad guys are not Muslims, Sikhs, Christians or Hindus, the bad guys are those who went on a rampage and hurt fellow Indians be it in Delhi, Gujarat, Bihar or Orissa. No one should go Scot free,  an apology from them individual wrong doers, forgiveness from the victims or lawful action is in order to restart
STEREO TYPING

This is the most common form of ignorance that surfaces every minute of the day in our lives. Our freedom to think is lost when we stereotype people and fall in the ditch when we justify it. If we want others to treat as fairly, we have to do it too.

If I murder someone, it is my heine that needs to be hauled off to the jail and mete out the deserved punishment under the law and serve justice. Stereo typing in this instance would be to blame my race, parents, siblings, spouse, nationality or religion, it is not wise, is it?? Yet we do it and let others do it without even imploring them to think. What has India or Islam got to do with my criminal act?

Shame on you and I to allow the mind to believe that the murder by a black man allows us to gossip that blacks are criminals, and start justifying some creepy facts to suit our beliefs. Oh well, the educated ones are not… that is even wronger than the first statement…Are all white people ruthless and war mongers? Are Muslims terrorists? Jews will get you one way or the other?

Catch yourselves in your stereotyping, where you make judgments about a people
We reflect on Holocaust and genocides every year, and one of the element is stereotyping. Details about the VII Annual Reflections on Holocaust and Genocides at www.HolocaustandGenocides.com

Event information from the Sikh Gurdwara is as follows:

Remembrance and Reflection: 1984 Sikh Genocide
Dear Friends and Neighbors,
The DFW Sikh American Community extends its invitation to you for our event "Remembrance and Reflection: 1984 Sikh Genocide". We aspire to share the tragedy which unfolded and provide recognition to an event which has withered away in the annals of history. We seek to provide conversation and engage with our audience to ensure dark moments such as these never occur again and that justice prevails. As the great Martin Luther King stated, "Injustice anywhere is a threat to justice everywhere."

All our educators, our law enforcement officials, our elected officials, people of faith and in short all our fellow Americans are humbly requested to take advantage of this opportunity. We will highlight and recognize the fundamental principles of this great nation which was on prominent display during and in the aftermath of the Wisconsin massacre of how a nation is to respond and respect its citizens. This fundamental principle must be brought to the forefront for all to appreciate and fathom.
Sikh Americans have been an integral and constructive part of the DFW community for over 50 years and we invite you to share in our experiences and a history which permeates within all of us.
The institution of langar (community kitchen) will be in full effect in which everyone is requested to partake and have a delicious vegetarian meal. So please come by and ask your questions, eat and drink some food, or just engage with your neighbors.

For any questions or comments please contact:
1. Gurvinder Singh

We will be honored and look forward to your presence.
-----------------------------------------------------------------
Mike is a speaker, thinker and a writer on pluralism, interfaith, politics, foreign policy, Islam, India, Israel, peace and justice. He is committed to building a cohesive America and offers pluralistic solutions on issues of the day. He is a frequent guest on Sean Hannity show on Fox TV, commentator on national radio network, writes weekly at Dallas Morning News and bi monthly at Huffington post and several periodicals. His daily blog is www.TheGhousediary.com
Posted by Mike Ghouse at 3:01 PM No comments: