We are happy to report that on June 19, 2009, Governor Perry signed SB 482, which creates the Texas Holocaust and Genocide Commission. The legislation takes effect on September 1, 2009; information about the legislation can be found at
http://www.legis.state.tx.us/BillLookup/Actions.aspx?LegSess=81R&Bill=SB482.

Thanks to each of you who wrote to your legislator, testified at the hearings, and contacted other individuals and groups to raise awareness about the need for this commission. Together, we have ensured that future generations learn about the Holocaust and other genocides. We especially wish to express our deep appreciation to the bill’s sponsors in the Texas legislature who guided us through the process and showed their commitment to the education and commemoration of these events.

Signing of the Senate Bill 482 is indeed a good step in the right direction.

As individuals and organizations, we want to invite every one to do their share in preventing the atrocities against other humans.

Pictures from the last two events are at: http://www.holocaustandgenocides.com/
An initiative of World Muslim Congress and the foundation for Pluralism.

Silent no more, speak up.

Feel free to send an email to: holocaustandgenocides@gmail.com 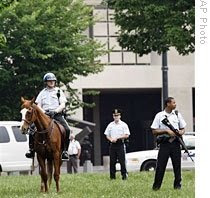 As Americans and as Muslims, we condemn this expression of hate; killing innocent people at the Holocaust Museum in Washington DC.

We all have a moral responsibility to protect and preserve life on earth, each time we see hate expressed in this fashion, we feel the responsibility to do our share of repairing the world. A lot of work needs to be done and we need to stand together and be a guard to each one of the 301 Million Americans. Our Obligation to one and all is to see us become one nation under the creator and be one community.

We mourn the loss of Stephen Johns, the security guard whose life was lost in protecting the lives of Members and the visitors to the Holocaust Museum.

As Americans we stand with the Jewish community and the symbols that represent the community including the Holocaust Museum.

Security Guard Dies in Attack at US Holocaust Museum
By Kent Klein
White House
10 June 2009
http://www.voanews.com/english/2009-06-10-voa53.cfm
A man opened fire inside the U.S. Holocaust Memorial Museum in Washington on Wednesday, killing a security guard before being shot by another guard. Local officials say the suspected gunman, who is believed to have ties to neo-Nazi groups, is in critical condition.

"It appears that immediately as he entered the front doors of the museum, he raised the rifle and started shooting," said Cathy Lanier.

David Unroe was visiting the museum with his wife and grandchildren when the shots rang out.

"They yelled, 'Hit the floor, hit the floor!' So we did," said David Unroe. "We huddled up with another young family for what seemed like quite awhile, but was only a couple of minutes. At that time, we were scared, wondering what's next, if we're next. And at that time, they yelled, 'Get up and run out, run out!' So we did and followed the crowd."

Security guard Stephen Johns (undated photo)
Museum officials identified the guard who was killed as Stephen Johns. In an e-mail, the museum director said he "died heroically in the line of duty."

According to news reports, law enforcement officials are investigating the suspected gunman, James von Brunn - a man in his late 80s who is believed to have connections to white supremacist and neo-Nazi groups. Von Brunn has a racist, anti-Semitic Internet website.

Police chief Lanier says there is no evidence that any threats had been made before the incident.
"We had no prior information," she said. "There were no prior threats of this nature about this incident. So it appears to be a lone gunman who entered into the museum and opened fire."

Rabbi Andrew Baker is the Director of International Jewish Affairs for the American Jewish Committee. He cautioned that U.S. Jewish groups need to be more vigilant about their security.

White House spokesman Robert Gibbs said President Barack Obama is "saddened" by what happened and that he is monitoring the situation.

The Israeli Embassy in Washington condemned the attack.
#
Posted by Mike Ghouse at 2:15 PM No comments: